Push and Shove in KiCad

When laying down PCB track manually usually some other tracks are obstacle and need to be moved away. In KiCad it is manual work, in advanced tools they are pushed making room automatically while another track is approaching. FreeRouter can do this for KiCad but its UI is far from perfection. KiCad will do it natively soon, as shown on this video.

On 18 September 2013, Tomasz Wlostowski on behalf of CERN team, announced they have some alpha version ready, not merged with main branch yet. Tom points to a web site that provides instructions how to compile it, which for win32 is simplified to one step described here. I gave it a try and downloaded 118MB of build tool which in turn spend 10 minutes downloading all dependencies and another 10 minutes building pcbnew.exe that ends with… compilation error kicad-winbuilder-cern/kicad-winbuilder/src/kicad/pcbnew/router/../pcb_plot_params.h:27:35: fatal error: pcb_plot_params_lexer.h: No such file or directory. Such a pity. 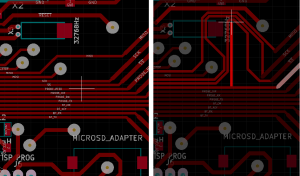 Kicad makes push on my proto board

Edit2: Couple days after first excitement I tried to help myself drawing dozen of parallel bus lines and to my surprise this alpha is completely unstable, I could not make it working longer than 2-3 minutes; switching between default/OpenGL/cairo views breaks pcbnew.exe within seconds. And switching views seemed to be the only way to work with it really: the interactive router picks only default track width so having different footprints I had to switch, bailing out program constantly. After 10 minutes of struggle the PCB file stopped opening at all leading to MS C++ library error on file opening.

I hope the team will have enough energy to push it through to stable release of Kicad.

This entry was posted in Electronics and tagged KiCad. Bookmark the permalink.