One of methods for automatic water level metering is to put a waterproof pressure sensor under the surface at well-known absolute depth and measure hydrostatic pressure that translates into the level of water over the pressure sensor. There is a plenty of such “level transmitters” on the market with prices ranging from $250 from Chinese market to $400 for digital transmission devices on local market. Add to it lengthy capillary signal cable and the price doubles. I have designed and constructed such device for less than $100. 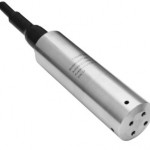 Core element of level transmitter is a sensor transducing pressure into electric signal. Among multiple physical properties most important parameters in this context are precision, linearity and temperature characteristics. The more demanding parameters the higher price of transducer – transducers from UK and Switzerland meeting 0.5cm resolution of water level cost around $70-100, complete transducer with analog output (e.g. 4-20mA current loop) starts from $250 and intelligent probes, with Hart or MODBUS protocol – starts from $300-400. To isolate air pressure, hydrostatic probe uses relative pressure transducer: water pressure on one side of it, air on the other end. To make it working the signal cable has capillaric pipe inside exposed to air conditions. Problem is that 30-40m of such cable, which is not unusual field condition, doubles the price of transmitter.

Main target was to make transmitter cheaper yet similar quality as commercial ones. Secondary goal was to warm-up in smaller/simpler design first (so far I have designed only couple toys like e-snowflake or glowing ping-pong ball).

Feasibility study started when I found Chinese suppliers able to deliver stainless-steel transducers of same precision for $25, 3 times cheaper that bought in Europe. While some European companies like Keller AG assemble parts in their own factories, some others like Impress Sensors in UK offer transducers strikingly similar in shape and parameters that can be found on Alibaba Chinese vendors’ portal. I decided to give cheaper one try and imported couple Chinese transducers for prototyping; so far they meet my expectations (more about it in next articles). 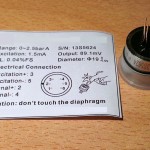 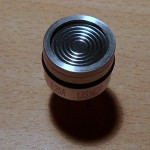 To save on enormously expensive capillaric cable, I decided to use two absolute pressure sensors, one underwater and one in the air (in data logger), pushing the problem of pressure subtraction from sensor to software in data logger. Even though two pressure sensors double cost, ordinary cable is negligible cheap – 30m of high quality petro-jelled water-resistive screened 3×2 twisted pair copper cable is less than $10, comparing to $200 of capillaric one.

Next I focused on data transmission. Analogous industrial standard for remote transmitters is 4-20mA current loop: forcing current to flow through two wires from master to slave increases margin to electromagnetic noise. Obvious drawback is it provides only one reading over the wires and supports peer-to-peer connectivity. Thinking of future I turned my eyes toward RS-485 serial bus. Benefits were obvious: for low speed (enough in this case) line can exceed 1000 meter, much more than required. Moreover it allows to build more complex topologies (using terminators, similar way to coaxial Ethernet old days) and what was most demanding – it carries on any payload over the wire. 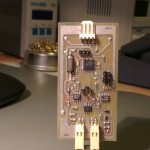 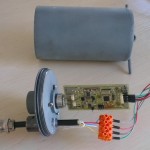 RS-485 is only physical layer so that next step was consideration on communication protocol. Review of several alternatives leaned me towards MODBUS, widely adopted industrial master-slaves protocol also used by high-end commercial level transmitters. Moderately simple protocol of MODBUS makes feasible using low-cost microcontroller on slave-end. FreeModbus BSD licensed library could simplify building even further as it allows commercial use.

Submerging level transmitter prototype posed problem of different nature – waterproofing up to 10-15 meters while ready to dismantle. It is easy to assemble board and mold it in polyurethane, however any mistake discovered in hardware means new PCB must be built and soldered. 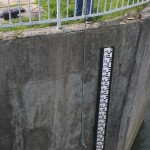 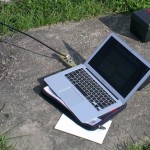 Together with my brother we decided to commission massive cylindrical metal case, far larger than typical factory form existing on the market, just to be able to put anything we want inside. Version 1.0 of level transmitter looks more like landmine, even more realistic once connected to long black cable :] Once field tests are finished, minimization will be priority for version 2.0 of PCB.