It was a long and bumpy way from taking pressure transducer hardware in my hands to having stable digitized values. Most of the time I spent learning instrumentation circuitry from app notes and books, just to make sure the solution meets assumed precision despite budgetary approach. Finally constant current bridge driver, precision operational amplifier and sensitive analog-to-digital converter did a job.

For non budgetary approach semiconductor producers offer specialized integrated circuits that combine all necessary functions before reaching ADC. Using bridge driver circuit like AD623 or combination of high-precision in-amps (instrumentation amplifiers) from AD82xx series, would save my time but would instantly kill the budget as they cost from tens of dollars each. I took longer way.

Typically transducer is resistive bridge with four connections – two inputs to power it on and two differential voltage outputs. When bridge is driven correctly, the output meets specification of producer. The word correctly is a key here, as sensors are, let say, calibrated in specific conditions, usually either under constant voltage or constant current. In such conditions the producer adds extra resistors inside bridge to linearize characteristics in function of pressure as well as of temperature. From literature I found that constant current driven bridges are less susceptible to thermal deviations considering same sensor characteristics. And I ordered constant current compensated sensors from China. 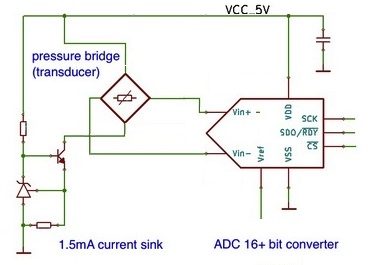 Next step was to design driver. With differential input of high-precision ADC I had freedom of choice, how to setup either current sink or source for bridge. I took as granted +5V supply, simply because most of remaining part of this module (like ADC, MCU and RS485 driver) are typically powered from +5V single rails source and I needed to have it anyway. From ADC data-sheet I found that its input is sensitive enough to be directly connected to bridge – what a relief! No extra op-amps!

Moving to current driver I was mostly interested in temperature compensation – the precise value of current was less relevant, I had to interpret voltage anyway so further calibration (real voltage to real pressure) was necessary anyway and I envisioned it will be done by microcontroller. Precision programmable voltage reference TL431 used to drive NPN transistor could work as current sink.

As the remaining part of transmitter, the MCU and RS485, looked more simpler I decided to create PCB at that stage. I have mounted current sink and ADC and started first tests. To my surprise in constant atmospheric pressure output voltage was changing a lot with temperature changes (tested in iced water and hot water). Current meter has shown current sink is not working properly, the current was changing with resistance thermal changes of pressure bridge.

I discovered serious flaw in design reviewing ADC app note once more: it was using 300 ohm bridge while mine was nearly 3kohm. Calculation shows obvious mistake: TL431 tries to keep reference pin at 2.5V so it is emitter potential, plus 0.2V of collector-emitter in worst case (saturation) plus voltage drop on bridge when driven with 1.5mA (which is around 4.5V) that gives at least 7.2V of VCC! 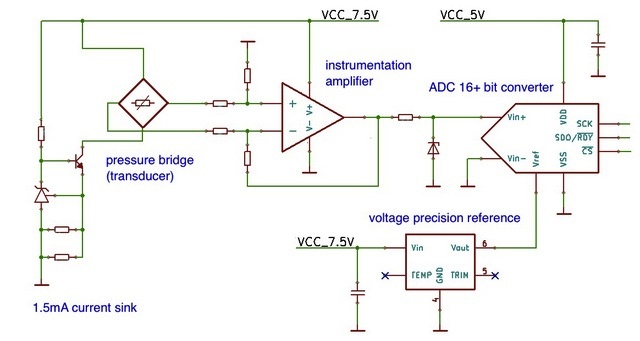 Higher supply voltage of bridge was at the maximum ratings of ADC so voltage shifting had to be added. I turned a circle around instrumentation amplifiers – I had to find cheap, zero-drift, single-rail op-amp. Having some experience with photodiode drivers I used matching op-amp as differential amplifier accompanied with precision resistors: keeping gain low (between 1 and 10) I could shift original bridge voltage span of 100mV up to 1V but in reference to ground. The remaining problem was that opamp powered from the same source as bridge (ie 7.5V) would still accidentally drive ADC input out of max range (6V). I needed protection for unexpected conditions. To avoid another op-amp I added clamping Zener diode in between – when opamp gives voltage in working range it does no affect circuitry but if accidental breach happens its clamping voltage keeps ADC input in safe range. What is more important diode junction does not generate extra noise impacting 16-bit ADC readings (in test with 21-bit ADC last 5 bits fluctuated same way with- and without clamping diode). 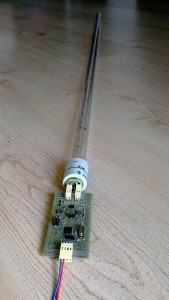 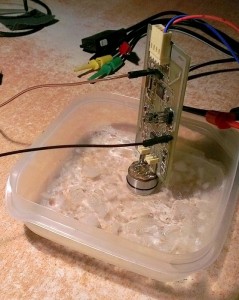 [Edit 2014-03-07] Thanks to discussion with Jose I was given a lesson on current sources and then did a homework. Voltage reference with negligible small quiescent current (micro-amperes) comparing to output current(milli-amperes) can be simply paired with resistor on output to generate constant current of value calculated from Ohm law. TL431 would not work well as its working current is around 1mA (and not guaranteed to be stable). In contrast the $1 chip REF3025 from Texas Instrument does what needed adding only 40-50uA to equation. 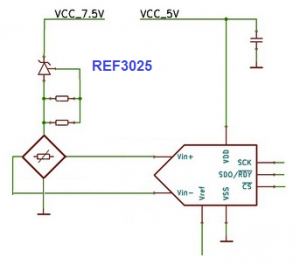 Or in other words how many bits I needed. Let start with boundary conditions: measuring up to 15m of depths means 25m of full scale (atmospheric pressure is equivalent of 10m o water and adds to absolute transducer scale). To have at least 0.5cm precision it turns into 5000 steps. At the same time input from bridge uses only fraction of full scale (1/5 of scale when in-amp was used and 1/12 of scale with REF3025 as current source and 1.25V reference for ADC). That makes expected resolution order of magnitude bigger. To handle 50000 steps ADC of 16-bit is required (2^16 = 65535 values). With the MCP3550, 21-bit ADC, that I had in my inventory I could go even further to sub-millimeter scale. That could happen only in theory because:

This entry was posted in Electronics, Software and tagged ADC, transducer, WLS. Bookmark the permalink.