Warmed up with HTC smartphone fix among other micro repairs I decided to give a chance and fix two other phones with accidently damaged displays. Both Sony Xperia Z2 and BlackBerry Z10 were given ridiculous cost estimates by authorised service and I was given green light to mess up with both unused phones. 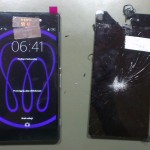 Sony Xperia Z2 was bought for nearly $800 some time ago while currently market value for new one is $500. Authorised service asked over $250 for display and digitizer replacement. Line of defence was that Z2 is waterproof and glued so it costs so high. One minute check on Aliexpress.com revealed that complete display with digitizer is no more than $70 and new genuine adhesive seals adds extra $5 maximum and Youtube.com shows how to replace it. Asking $180 for work-hour rework was a straight-up snatch!
The whole operation took me 60 minutes from start to phone fully operational and could be faster if not some differences in construction (extra adhesives keeping elements strongly tighten and so on). 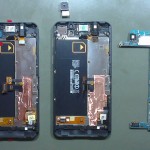 BlackBerry Z10 was trivial construction comparing to Xperia as it comes with front side frame completely integrated with display and peripherals (like loudspeakers, buzzer etc). I needed only to transplant mainboard and back inner cover which took me about 15 minutes in total. This time price was also ridiculously low when importing directly from China for $12 and beaten any offer from local GSM services, authorized or not. 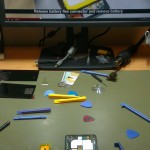 Having GSM basic service skills is not new now, one day BGA will become popular even in home-made electronics so getting highest level of sophistication in GSM service (BGA reballing) will make it real profession. Fixing things is not a niche anymore (unless you are offline) so it is time to look around for something giving more buck-for-a-bang (reversed order intended) 😛

This entry was posted in Electronics and tagged GSM. Bookmark the permalink.