Visiting Jordan three years ago I was thrilled by the outstanding Dead Sea. Choosing seaside I had no time for Petra. Once I was requested to get there again I instantly knew where to go this time. Attracted by ancient city with thousands of carvings in rock with the iconic Treasure temple, place of Indiana Jones shootings, I decided to make a run through the rose red desert place. 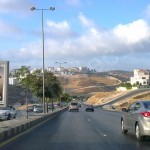 First I had to get to Amman. Striking observation on revisiting the capitol was numerous road construction sites on the way to the city. Good for Jordanians as it is one of boost factors of country development. These brand new roads are in contrast to local roads, like on the way from Amman to Petra: uneven surface, cracked and full of deep holes, like never maintained. The contrast is even higher as on one hand these days Jordanians heavily use hybrid cars (most of them pre-owned and imported from USA), on the other hand it is hard to get used to the moon-like view inside the city, where undeveloped areas between houses and along the streets are a mess of stones, dirt and trash dump. 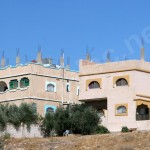 Having one day off I managed to get to Petra, 300km away from Amman, to see ancient city remains marked as UNESCO heritage site. Couple hours drive each way was kept interesting chatting with Jordanian driver. Opinions exchange and discussions on geopolitical situation of Jordan on one hand and discovering cultures on the other; I have learnt for instance why most of the buildings in countryside looks unfinished, with rooftop plenty of concrete and steel bars. In Greece keeping houses unfinished let inhabitants avoid taxation, for Jordanians however it is tradition where parents let next floor of family house to be continued by grown children

Petra itself turned to be what I was prepared for. Vast red rock landscape with dozen famous places marked on the map and thousands on anonymous carvings spread out across tens of square kilometers. Just walking main trail from entrance to most remote well-known Monastery is about 8km one way. Even though September is off season, plenty of organized groups, mainly Japanese, made tight passages of Siq similar to pavements in peak-hours in metropolises.

It wasn’t hard to stay alone though. More than half of my seven-hours walking I spent climbing up through empty trails meeting one or two hitch-hikers every half an hour. Getting to the top of mountain to the High Place of Sacrifice on the way towards Treasury was quite surprising. While most trails make flat serpents surrounded by hundred-meters high rocks, that trail was hilly right from the Roman Template and in 2/3 of the distance become 30 minutes staircase climbing to get to the top hundred meters up from the ground. A way to the place with amazing panorama of the whole valley. 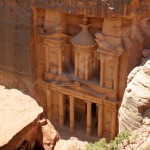 Preparing for hiking I was attracted by the internauts describing “secret trail” to the cliff rendering view on Treasury from above. To get there it was another hour of climbing up and way back in full sun and total silence. The way up ended at the Bedouin tent few meters from the cliff. Its inhabitant got me a refreshing glass of tea and took a souvenir-like photo of me. Now I need just to draw a fedora hat to become adventurous dr Jones. Secrecy of the trail turned to be virtual: I got there instantly following tip from Aaron’s blog. I would just add a bit of precision saying: close to the Royal Tombs find Al-Khubtha Trail sign (close to dotted line between 12 and 7 on this map). Keep walking along tombs on your right side; finally you will get to the stairs to the top. Up there you will find another sign, take the route down passing rocky house on its left looking for stone piles (cairns) marking the trail.

Is petrified Petra worth visiting and paying highest entrance fee ever (50 dinars, nearly 60 Euro)? While some people say in exaggeration that it require at least couple days onsite I am skeptical. Maybe it is good advise for retired people, or for historians or archeologists. Hiking around a bit more than half a day gave me an impression of the place, walking around alone I could put life back to that place using imagination. Same like with Cairo’s pyramids: to see it and walk away, unless I am asked to guide friends or family.

This entry was posted in Places. Bookmark the permalink.