After almost 12 years of marriage with Nokia brand I decided to try something else. I wanted to have phone with portable GPS with a screen big enough to see maps while driving a car. Anything more was an option I thought. My ignorance ended up right after I started to play with smartphone of my colegue. Out of sight, out of mind.

It is a toy, I agree, but processing power and its usability gave me quick rationale for new buy (like everyone I like to cheat myself :] ). I new I want to have HTC Desire, proven and reliable. I though HTC Desire Z with QWERTY keybord, would be nice add-on. I gave up in first 5 minutes of play – it is twice heavy comparing to HTC Desire and old Nokia cellphone, and its keyboard opens too easily… I was not convinced. I fell back to Desire without Z and bought it before hesitation would appear.

I was overwhelmed by the pack of sensors built-in: multitouch screen, GPS, magnetic field, gravity/accelerometer and light sensors, 5Mpix camera. All them combined with 1GHz Snapdragon CPU and 800×480 screen, give strong foundation for play station and utility apps host. Factory settings of HTC are excellent and instant browsing, download and installation of apps make customization enjoyable.

Computer geeks can leverage from the big screen accessing remote systems, either using SSH console or tunelling connection to home network and connect to remote desktop of home PC (either windows RDP or VNC if you want). It is not part of Android, but the market has a lot of good enough applications for free or very cheap ones. 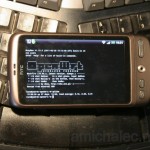 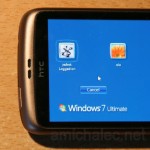 A little scratch on superiority of HTC appeared when I tried to migrate my contacts plus calendar while avoiding exposure of my data through online services. This way is more tough, especially if you do not have right software in place. The HTC sync is far weaker than Nokia sync from Nokia PC Suite. You imagine my reaction to the former, when I just tell you what I think of Nokia’s clunky software. The candy interface is overengineered and too user friendly. Behavior of USB drivers also is not what I was looking for. The only way to proceed with HTC sync offline is to use MS Outlook for data transformation. If you choose Outlook Express, you cannot migrate calendar. Even though the latter would be still ok, when you are using Windows 7 you hit the dead end – it does not have Outlook Express and Windows Mail, its new equivalent, is not compatible with (visible to) the HTC sync. I decided to use temporar vmware image with Windows XP and MS Outlook. To my surprise, HTC USB driver happily crashed vmware image three times in a row, right after I connected smartphone which initiated HTC sync lookup inside vmware windows. Fortunatelly I could use my company’s notebook, install Outlook on it and migrate data. To summarise, pain in the arse.

Overall I am really satisfied. The only downside I see is battery capacity, or power consumption, leading to the same conclusion, anyway. Battery lasts for 6 to 8 hours when CPU load increases when taking a lot of pictures, using GPS with map software, gaming or having backlit constantly on. The charging time is not supersonic too; with 5V/1A adapter it takes almost 2,5 hours to load empty battery full. In contrast, when the phone is locked (display off) and I use it only for short calls, texting or time/calendar checks, then it consumes up to 20% of battery a day, which is fair enough.