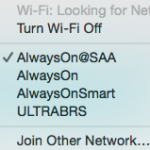 Lately at the airport so-called user-friendly Apple operating system  was stubbornly failing to log into WiFi without giving me any clues. Meanwhile Android phone was happily sucking data from the same hotspot. It turned to be an OSX (Yosemite 10.10.4) bug when hotspot uses valid for SSID “at” (@) sign. Intuintion of engineer let me quickly overrun this issue. But hey Apple, what about average Joe OSX is designed for?

Here is the case: I was using public open hot-spot at South African airport called AlwaysOn. It is open connection, no link level security. Then I moved to lounge and tried to connect to higher bandwith lounge hotspot named AlwaysOn@SAA  authenticated by password. OSX connected to new one but did not ask for password and connection were failing. I spent couple minutes puzzled until I have removed AlwaysOn from the list of remembered hotspots.

Sound like network linking part of OSX connects to AlwaysOn@SSA while authenitcation part of OSX chokes on the @ sign, truncates it name to AlwaysOn and as there is other name like this, it thinks no authentication is required… bummer.

This entry was posted in Software. Bookmark the permalink.