Beer flushed thru air vents into Macbook mainboard killed it instantly. F-words came even faster as it was done by someone sitting next to me on the airplane from Germany to USA, a guy who called it an accident, not a fault. I was not surprised that later he did not respond to my contact attempts even though we exchanged business contacts for that purpose. What surprised me was his civil cowardice, especially contrasting to his higher rank US Army officer profile. Thuck you very much Marcus! 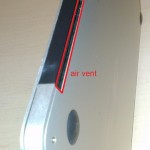 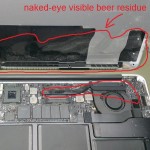 Marcus McCident tipped his can of beer so unfortunatelly that it spilled on Macbook Air from behind. Display and keybord were safe as sealing makes it dust (and spill) proof when closed. The back side however has thin and wide air duct with mainboard right behind it begging to spill any liquid on it. And this is what happened.

Firstly I wanted asses damages and I have approached iStore. Apple has clever business model: any liquid voids warranty no matter the level of Apple care insurance program. Genius bar super-duper technical geek was unable to say anything more than “we need to send it for repair” and they offered repair in flat rate, no matter what needs to be repaired, for trifflling $755. Even for no-repair, and this is the clever part: non-authorised service in my city told me that usually cleaning from residue (for $60) helps and if not then they replace burnt SMT components which cost far less than complete module like $500 logic board. 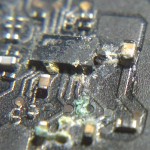 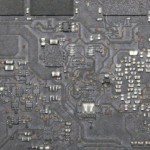 Beer was everywhere: almost every gold via (circle) turned brown 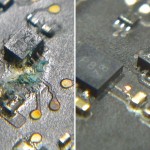 After couple emails and text messages asking Marcus McCident for his $100 cleaning participation my mac was dry and still dead. I decided to go hard way and clean it myself using basic chemistry for electronics: IPA alcohol and ESD-safe brushes. One hour dismantling, brushing and head-spinning inhalation to get hard work done: beer residue mostly sugar was barely dissolvable and in some places brushing was not enough, scraping was the only way. IPA evaporates quickly but I wanted make sure every pore between chip and board is dried as a bone so all cleaned PCBs landed in oven heated up to 70 centigrades for 2 hours. 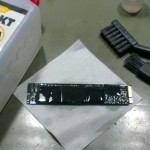 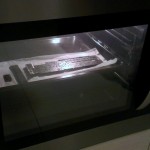 Another 15 minutes of assembly, charging battery a bit and… it resurrected! Half an hour of CPU and GPU stress tests and I could take it as repaired. Unexpected new skill has been added to my portfolio: apple unfuck genius. And hey Marcus, suck you battalion!