When I found inner part of liner torn in many places it was time to look for new skates. Powerslide Metropolis 2011 was good pair of boots already proven in urban stroll in dozen places on four continents. Getting new liners was virtually impossible so I decided to get new boots and sell out old pair for parts. Two days later I got 2013 model at home. And I could keep silent with replacement if not a little disappointment. 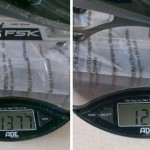 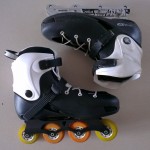 From online reviews and forums it is easy to catch differences between 2011 and 2013 models – frame is first and obviously visible: a black beta-frame, which is said to be lighter and more stiff. Also straps have changed, buckle opens opposite way than before and has more fine-grained steps (no micro-steps though). And that is it. I would argue if they are significan improvements especially after couple days of tests when I could not observe any nuances except for tight fit of new liner. In fact lighter frame means to me absolutely nothing as the weight loss is neglectable – one boot without wheels is 0.1 kg lighter but at 1.3 kg it is less than 10%. Maybe slalomers would agrue but who is seriously using Metro for slalom? 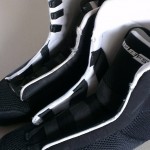 No eyelets in new liners!

Disappointment came right before first use. I was astonished by lack of lace holes on the liner. Not a single eyelet supporting laces in upper part of shell. And they provide a meter long laces to do with them exactly what? Intrigued by this flaw I started googling for pictures to check if my pair is misproduced or it is by design. And I just found that on all pictures, Powerslide webside included, laces were simplu hidden so no-one could suspect (or compare) if somehing is wrong.

It was irritating to keep right loop size and not let lace be too long and fall into wheels, so I tried double-loop the laces but that looked just bad. I decided to shorten them and secure ends from unraveling. The same I did with straps that are way too long even if loosely buckled. Finally lack of tight lacing in upper boot is not so important so with a little fixes I made new pair working the same as old one. Final opinion is netral but I think experienced company should pay more attention to details. 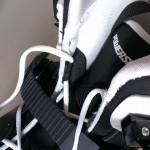 Rubber stitching as eyelets would torn it off. 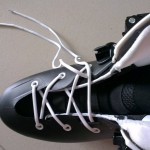 And what now with meter-long laces? 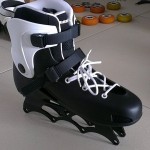 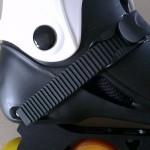 Should I coil the strap around my ankle?