Freezing cold, snow outside and less than 3 weeks to New Year’s Eve means no more outdoor inline skating in 2012 at least in Europe. Autumn was good though, I would even say b*est since it matches to B{udap}est and B{uchar}est, two beautiful cities conquered at the turn of October and November. 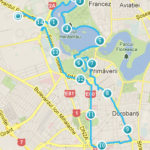 I have been to Bucharest some time ago. Caught by volcano’s ash cloud I  regret I did not take my skates with me that time. They have excellent bicycle tracks, good pavements and the city is flat as a table. I was lucky to have dry and sunny weather late October that gave me a chance to explore the Herastrau park and north part of the city. Late night skating would be perfect if do not have drainage ditches crossing asphalt path-walks leading to immediate full-contact in horizontal position; as my both boots left behind, my cerebellum put my arms in guard pose on time, right before big splash. It took me couple seconds to realize what happened as I did not see any obstacles. Wrist-pads and thick sweat shirt minimized injuries of arms and elbows, unprotected knees were bloodily bruised. No risk no fun. I compensated it myself having excellent dinner in Caru cu Bere and couple beers with college also deployed that time in Bucharest.

no images were found

There is not much of night shots from Bucharest as for skating I was using HTC Desire phone for navigation and occasional pictures, that simply are black spots after the dawn. In Budapest, surrounded by hundreds of architectural pearls I was brave enough to put HTC One X into a pocket and use it during a ride – it was good choice as camera is excellent even in low light conditions so that I snapped tens of pictures in 90 minutes in distance of 17 km what would cost a day of walking around to get the same experience. 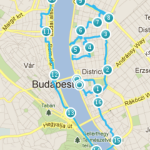 This time I was lucky enough, no surprises, no gotchas, no new scars. Riding along the river is nice experience, long tarmac path-walks (pay attention to small obstacles and uneven surface) or smooth stones. The more you go into the 5th district (central district of Pest side of the river), the more cobbles and other roadblocks you find. It is still easy to improvise riding along pavements on the streets – especially weekend night means virtually no cars on the streets. Even though I have been couple times to Budapest already, the more I visit the city, the more I realize how much I missed before.

◄12
This entry was posted in Places, Skating. Bookmark the permalink.