I have a plenty of compact fluorescent light (CFL) at home. While energy saving is quite obvious, the time to warm up is drawback; using CFL in place of frequent toggling is not a good idea. On the other hand light-emitting diodes (LED) become source of even more efficient light with immediate full brightness. Excited with availability of LED bulbs powered directly from mains I jumped into that bandwagon, making a mistake I could not predict. 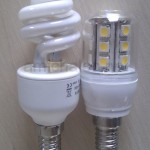 LED light is getting better. Modern LED chips can produce more natural light for human eye, are more efficient producing more luminous flux per same unit of power, and more error-prone. All this makes LED a perfect candidate for in-house light. I already use SMD LED stripes to get ambient light in back of shelves in one room and this works great for me: system consumes 2-3 watts while it is glowing as 30-40 watt of plain bulb. If you go outside you can spot LED lights in many places too: daylight reflector or stop lights in modern cars, street lights, outdoor screens, cyclist blinking or head-lights and so on.

As counterpart CFL bulbs are really popular (due to eco-trend and EU lobbying programs) and non-expensive now. For brightness level of 60W regular bulb costs around 0.5€, CFL equivalent 7-9W costs from 2€ (made in PRC) to 8-10€ of well-known brand, while 3-5W LED bulbs drain 5 to 20€ from your wallet. 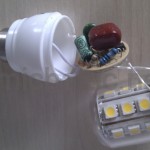 I would stay with CFLs if producers would overcome several pain points. Firstly full brightness is reached when it warms up which takes up to couple minutes. Secondly CFL is sensitive to power-cycles: some tests show that switching CFL every 2 minutes kills it within couple weeks. Thirdly even expensive models of CFL can burn/fail after couple months of regular usage – I have around 20 mid-range CFL bulbs at home and in last couple years I replaced more than half of them. LED is more promising with all aspects: resistive to power-cycling much longer length of life and millisecond start-up time.

So what is wrong with LED bulbs? Eye visible flickering!

Most producers of mains-powered LEDs uses cheap approach to internal power-supply. While low voltage LED systems are using stabilized 5-12V DC adapters, in LED bulbs it is rarity. Instead you get transformerless power block with resistors, rectifier and filtering capacitor (see this thread). Since LED is low inertia source of light, pulsing power supply means pulsing light. For bridge rectifier the flickering frequency is doubled frequency of mains – in Europe it is 100Hz. If filtering capacitor is too small voltage drop-offs are significant and observable by human eye and video recorders. It is not like stroboscopic effect in disco club, but looking at source from angle you can feel something is wrong. Finally, and most spectacularly, moving fast in that light you can literally see that effect, watch my video below!

Some people try to fix cheap LED bulb replacing filtering capacitor with larger one, to reduce drop-off. I gave it a try. Replacing factory 1μF/400V capacitor with 10μF only partially solved the problem, 47μF almost did it. The trick was the size of aftermarket capacitor: you cannot fit them into casing of LED bulb. The other annoying side-effect was couple seconds red-glowing after switch-off due to longer discharge time of bigger capacitance. 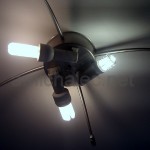 Warm white of LED is really cold in cheap models

I replaced “cheap” version (7€ per item) with Hikari brand, claimed as Japanese one. That one has “warm light” more warm comparing to previous. A positive aspect paying twice more. Website claims 5W E14 (15€) version uses stabilized power supply. I assumed 3W version has the same approach and got upset again facing same stroboscopic effect. Indeed technical description on website does not mention high-end supply so I asked seller for exchange 3W with 5W. To my surprise they responded that “[…] producer had to change construction since latest warehouse supply of 5W bulbs also gives flickering […]“. I am not sure who was lying to whom, but I get rid of all LED bulbs returning them back.

I described my issue on electronics portal, looking for brand with non-flickering LED bulb, but my research remains unanswered. I am back to CFL, for some time at least.