Vertex3 SSD pros (and cons too)

PC architecture recycles nearly every 2-3 years, after that time it is really hard to make any upgrades without replacing most of the hardware. Looking at my desktop computer I realized that I can boost it up only one way, speeding up I/O throughput. Solid State Drives (SSDs) become available to every Tom, Dick and Harry, give second life to any type of computer. One SSD is not equal to the other one, however; the more you dig and compare the bigger headache you get: burst rates, random read/write performance rates, hardware encryption, 25nm vs 34nm chips, SLC vs MLC, and finally, most famous, firmware problems.

Replacing HDD with SSD would be more productive than replacing whole platform (motherboard and all associated components). I started SSD research looking for capacity enough to hold whole OS plus at least one virtual machine image. Size near 120GB is compromise of disk space and its cost. Secondary factor, maximum performance-to-price, required more investigation time. Narrowed choice to near-120GB disks it was somehow easier. 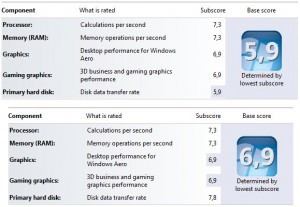 My favorit from the very beginning was OCZ Vertex 2, dedicated for SATA2 controllers which my mobo was supporting. Delighted by reviews and benchmarks I was cooled down when discovered firmware problems of Vertex2 series – multiple customers were affected by groundhog day effect, also called time warp: when disk was power cycled it could loose recent changes (last day or more) due to buggy volatile RAM memory support on disk on firmware side. Since SSD is just like a microcomputer, flashing new firmware with fixes is not a problem, yet community reported recent versions did not completely solve the problem. I was at least confused: buy Vertex2 for 130 euro, or take a look on Corsair F120 or even go for Intel X25 or Crucial M4 rising budget to 160 euro.

I turned my eyes on Vertex 3, faster brother of Vertex2 (for SATA3). Despite I have SATA2 I decided to overpay a little and have SSD a little longer (I am not concerned by wearing effect, as many reports show disk should easily last for 5-10 years at home desktop before loosing memory cells). I was aware that due to SATA2 throughput I will not reach 550MB/sec in burst but only 270MB/sec as Vertex2 offers, that was the price of stable SSD I could pay. Spending 20 euro more I purchased the device and reinstalled system. 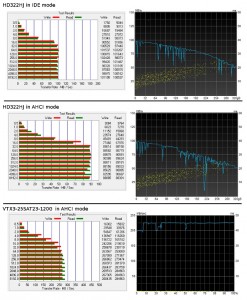 HDD and SDD in IDE and AHCI modes

First impressions were astonishing: with cold start it takes around 5-8 seconds in BIOS screens which cannot be faster, but then with Vertex3 the Windows 7 starts in 12 seconds (comparing to 26 seconds on HD322HJ), measured from boot disk choice to logon screen. Waking PC from stand-by takes 2-3 seconds to fully operating logon screen! More intense tests revealed how much speed PC gained from I/O: startup of virtual image with another Win7 takes 29 seconds (comparing to 55 on HDD). Running vmware image with Windows Server 2008 and IBM BPM 7.5 advanced version leads to WebSphere Application Server startup within 1 minute 40 seconds, while on HDD it took 3 minutes 45 seconds, measured from running start script to “open for e-business” line in log file. GIMP graphical tool starting ages on HDD now is 3-4 second operation!

To my surprise problems begun a week after SSD installation. OS was choking for a while and then crashed with blue screen. Restart stopped in BIOS that could not detect bootable SATA device! I jumped into google and found that Vertex3 has some problems of occasional SATA detection problems that leads to BSOD on windows and to recognize the device by BIOS.  After full power-cycle (power off system, wait a while and start again) disk worked as if nothing happened. Over month now, it happened 3 times. Couple days ago I upgraded firmware from version 2.06 to 2.15. If the problem remains I will RMA the disk. That is unfortunate that OCZ allowed to keep with the market lowering quality standards. My home system is far from mission-critical installation (only development/entertainment) so I do not care that much if spontaneous failure happens (I am used to it in fact). If the firmware update does not solve the problem however I will be a little orthodox and go for competition, to spank OCZ for such a customers’ good faith overuse.