New skates on the block

My Salomon Crossmax skates are history. For a long time I could not decide which skates would replace them well. Finally I got Powerslide Metro freeride skates, because they receive positive comments, because I checked them personally and because…  I got discount.

Last year, when original liners have just torn apart after washing, I fit in used Seba liners as I bought new liners for Seba shells. I was quite happy since urban skating was reactivated. Some time later I started to suffer from skin scratching, up to blisters or excoriation right below inner sites of both ankles. All because mismatched elements: junction of cuff and shell plus sewing of liner made some additional pressure to inner part of boot. In many other places, plastic shell devastated boots (as seen on photos). Finally I decided to move on and find replacement. Meantime, I was recovering from serious contusion that stopped me from skating for almost 2 months (!), and new pair of skates would be good motivator for reactivation. 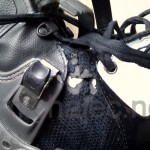 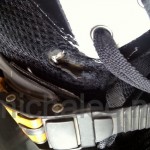 Cuff strap plastic did the damage to liner too 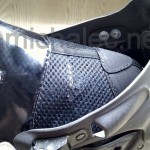 Back of liner worn by cuff plastic edge

At the beginning of this season I was trying Fila NRK blades. I really liked them but I thought I can survive with Salomon. Tired of constant injuries, three weeks ago I leaned toward Fila NRK Road. This urban and slalom skates model gains attraction and positive feedback. Excellent Thias’ detailed review analyses NRK Road construction. When I found 20% discount offer for the last pair size 43 EU, I decided to get it; 280mm of inner size matched close my foot length (281mm) and since I was trying regular Fila NRK same size, I assumed they will match. But they did not: I had to bent my toes even after I strapped boots tightly. In Seba High, in contrast, the tightness was even bigger, but the toes were not affected that much. I have returned them.

Motivated by my devastated feet, I found in one of sport shops Powerslide Freeskate Metropolis discounted by 40%. I would hesitate to spend almost 170€ for blades, full-plastic shell and straps, looking clunky comparing to Crossmax. For 100€ I could not get anything better! 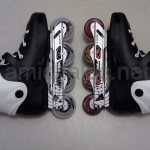 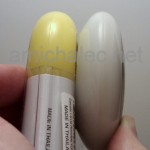 Stock wheels are all 80mm and since I am reluctant to stock wheels and use rockering 76+80mm setup, I sold them out on auction, saving another 30€. Saving was virtual since I ordered Hyper Concrete +Grip for 50€ immediatelly. Meanwhile I assembled wheels setup using spare, worn out a little, Seba wheels and Hyper Pro. Comparison was biased by wheels’ types. So far I was riding on  eight Hyper Pro 150 83A wheels for outdoor hocket that gives good grip and smooth ride by absorption of surface irregularity. Seba Deluxe 85A wheels in the middle of frame gave me better rolling but tougher urethane led to more vibrations. In 90 minutes of intense ride through the Cracow downtown I ended up tired, with completly wet liner, and to my surprise, without any injuries and discomfort. Test completed successful. 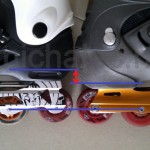 Weight center of Crossmax was lower but is insensible

Liner is very comfortable and shell looks armored. The very front of shell is so stiff that tightening laces is almost impossible. However the liner is tight enough in front that it does not degrade steering control. In Salomon there was additional velcro strap to tighten the boot; it was necessary because the shell was much more soft and wider. The shell in toes area is taller a bit then liner, so you can see the gap, which does not look very nice. I ignore this because the shell is really massive (to support pro sliders and jumpers). Ankle and cuff straps give excellent control over the tightness; they are very long and allow you to get feeling of “concrete boots” if you like. Even though the center of weight is higher than in Crossmax I did not notice it while riding, they are very responsive due to 243mm frame, and even more comfortable toes’ zone, comparing to Seba High, does not degrade steering control too much. In contrast to Crossmax, in Metro it was easier for me to do the crazy. 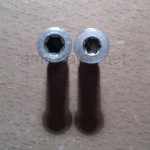 Torx screws to be replaced by inbus

As I am not a fan of logos or graphics on skates I was happy that black print on cuff was prone to toluene (aka nitro) dissolver. In case one would like to anodize the frame, it also removes painting from aluminium frame. To complete the customization of new blades is screws replacement – powerslide uses torx screws while I am used to inbus (hexagonal) screws. The reason is simple: I have impressive collection of inbus screwdrivers in different places, that makes me safe in case I need to tighten skates’ screws.

Salomon Crossmax did the job, after 5 years of intense service I let them go. Long live the Metro!

2 Responses to New skates on the block