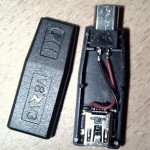 Some time ago I bought miniUSB-microUSB adapter for pennies to avoid collecting more and more USB cables. I have used it for USB power adapter with miniUSB plug to charge my HTC Desire with microUSB. To my surprise couple days ago, when I tried to exchange data, I noticed my PC does not see HTC, which in turn detected “charging only” source. When I opened up USB adapter and saw only two cables for power lines this behavior was obvious: so far USB cannot natively trasfer data over the air…I checked again the internet auction where I bought USB adapter. It clearly states “USB 2.0 compliant adapter”… well, either seller did not use this adapter or is cheating with people (I have already notified auction administration about possible overuse).

Equipped with soldering station I decided to rewire adapter with 4 lines instad of 2, and make if fully working. While linking mini and micro sockets takes time, not to make short circuits between lines, then additional difficulty was that microUSB had some soldering pads cut off. 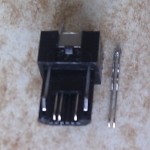 After a while it was ready, I plugged it in and… nothing happened, device was not recognized. I checked wires and to my another surprise microUSB plug had 2nd and 3rd pin short-circuited; I disassebled the plug to find out both pins were made of one piece of metal! I cut them into pieces and additionally rearranged all pins so that soldering pads were easier accessible.

I have risen my eyebrows when plugged HTC told me “car mode detected“. This time Polish translation of wikipedia blown it – there there is no distinction between regular 4-pins USB and 5-pins mini/micro version, so it suggest using pins 1 to4 leaving 5th unconnected. In English version it is cleared out that 4th pin is reserver and pins 1,2,3,5 should be used. According to HTC documentation, the device detects connection between pins 4-5 (in my case ground potential on pin 4) and thinks it is car holder. Third rewiring attempt was final one – one hour and couple lessons learned later, I had fully working adapter.

What was decision driver to have 2 lines instead of 4? I bet it was manufacture cost, not material. Looking inside, the wiring was human made. If they have problems with wiring tiny elements then both sides of adapter could be SMT components fit to PCB in automated process as same or lower cost in total… think first :]

This entry was posted in Software. Bookmark the permalink.