For a long time I was ignoring that tingling feeling where my forearm was touching Macbook while typing on second laptop. Sensation that was sometimes closer to stinging, as if tiny hair was pulled of my skin. It happen at home, in the office, just from time to time. Always when bare skin was laying down on aluminum casing of Mac. When I finally realized it happens always when Mac is plugged thru adapter to mains I took closer look. Does Macbook Air 2012 suffer from grounding issues giving me some noticeable residual AC voltage enough to irritate the skin? 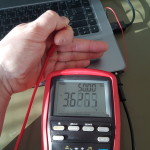 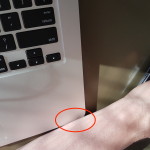 Slightly touching Macbook when typing on other computer

When I do contract work on client-provided sealed/secured HP machine, I keep my Mac aside for unrestricted net surfing and private whatnot. Wearing T-shirt my left forearm can contact Mac’s corner giving this weird sensation.

For a long time I simply ignored that until one day I decided to do some basic measures. My groudology is not a top notch skill so I took naive approach and simply used my multimeter, grounding one probe to chassis of HP laptop, and using second to get some readings. Since HP has grounded 3-proned EU plug its metal parts of casing should be local zero for measurement. My left hand was holding second probe wire touching Macbook at the same time.

Measured voltage confirmed my suspiction. While MagSafe was unplugged body voltage was just few volts, and could come from ionization, some residual of floating wire, body being antenna etc. However with power adapter attached AC voltage was oscillating from 30 to 50 volts! That voltage level makes your skin irritated even at the very low current 🙂 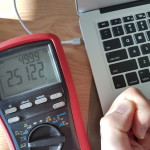 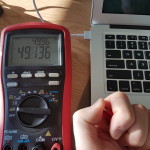 It sounds that feature is available in both old and new aluminum enclosed Macbooks.In contrast MagSafe adapter I use is 2-proned EU plug, missing grounding part, and that combined with metal case give such annoying bonus. Even though some claim that 3-proned cable for MagSafe would help, I do not buy it – third ground wire is not connected to adapter at all, so why would that be a game changer? MagSafe charger has only two inlets, while big metal button is just electrically disconnected part holding charger and exchangable socket adapter tight. So transformator is not connected to ground wire of mains.

Well, so this tingling is something you either love or hate… which is so Apple anyway.