Counterfeit chips have always been on the market. Most of the time stories were told about fake high-end components like computer GPUs. I did not worry and over last couple years I bought hundreds genuine chips from China. They were always low-cost components and always worked as in specs. Until now.

When swindlers polish GPU to place new markings on it they are planning to earn $100-300 on each faked chip. When $2 chip is targetted, like FTDIs emulated on MCUs, I feel concerned about counterfeits determination and become more cautious when receiving chips from China. That was the case with my latest project when deliberately (or lazily) I have chosen known-to-me FT232 chip to let USB-incapable Atmega communicate with computer. 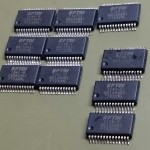 First thought unpacking envelope with FTDI chips from aliexpress was to check them against infamous story of FTDI drivers bricking fake chips. Quick soldering led to Windows moaning USB Device Not Recognized. Usbview got me unexpected VID and PID set to zero. Bad luck as I had 2.12.0.0 driver that could simply take down my chip if fake detected. Few moments of FTDI drivers downgrade and resoldering another chip later and I got… the same unrecognized device message and VID/PID set to zero. But wait a second: nasty driver should only set zero to PID while usbview displayed all other data zeroed. Suspecting cold-joint or oxided pin I slowly reflowed pin by pin using miniwave soldering tip. No luck either. At that point I decided to check the board using some old FT232 I still had in my store; couple minutes rework and I/O leds blinked shortly, Windoze pondered on and happily announced device recognition. That meant two things, I solder reliably and I did not buy fake chips from China… I have just bought stone dead chips! Dead or broken host controller was unable to contact device. I have resoldered 3rd chip to get the same zeroes of death. 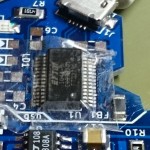 I was tired of reworking my board getting closer and closer to accidental pads burning. I cleaned pads with soldering wick and started placing them one by one, fixing in place with sticky tape and finger-pressing firmly on USB connection. Only one responded correctly, the other 9 chips were dead. I repeated that exercise twice to get the same stable results.

Since my aliexpress transaction was not finalized I dedicated another half an hour to place the formal complaint. Seller accepted full refund. Interestingly it happened within minutes and without any comments as if seller simply knew they offered chips were broken. 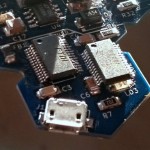 Old FTDI engraving (on the left)

To learn the lesson completely I meticulously reviewed other FT232 offers from aliexpress. Strikingly most offers, no matter populariry or price, had at least one complaint comment translating to “fake chip” (not dead though). I also sent couple inquiries asking sellers to confirm genuininty of offered FT232 and only one responded it is guaranteed.

Some people emphasize visibly engraved logo on older chips. Recent ones do not have it. Bear in mind however that FTDI changed marking technique over time and datasheet does not specify such details. In other words no engraving does not imply fake chip.

There is plenty of alternatives I did not consider minimizing variable elements in my design. Looking for pin-compatible chips I narrowed the list to Prolific PL2303 and Cypress CY7C65211. The latter was given a lot of enthusiastic opinions, sadly I could not find Eastern market offers for small quantities. Even though Cypress chip is pin-compatible it was not dollar-compatible when comparing local market prices to FTDI from Asia. PL2303 was the only option. I have found sub-dollar PL2303HXD revision giving built-in oscillator required by my design. As of today I am still patiently waiting for parcel from China to see whether plague of false/broken chips hit Profilic brand either.

Edit: Couple weeks later I got I got five PL2303HXD from china. Soon after I made a compatibility test. It took me 2 burnt chips before I realized my mistake. Recalling RTFM rule, especially true for datasheets, I slapped my face: microcontroller is 5V supplied and PL2303 and CY7C65211/213 chips also have UART side rated up to 5V… except for PL2303HXD whose UART is limited to 3.3V… d’oh!