For prototype I estimated that 128kB or flash would suffice and I was right; firmware took 75kB even though fatten up by embedded strings used across the code for tracing. On the other hand 4kB RAM of Atmega128 turned to be almost insufficient: I had to tune stack sizes of tasks with ten-bytes precision. Tests were running for weaks without problem, yet extra function added in chain of calls could potentially corrupt memory. I had to make more room to avoid hard to debug problems before field deployment. 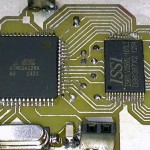 Test board for external SRAM

Typically in embedded environment memory usage was under control from the very beginning. Adding feature by feature however I could not avoid static allocations done by referenced libraries and, to some extent, by my own code. At the end of software development 2kB of RAM was just gone:

Remaining 2kB was dedicated to RTOS and also appeared to be tight place:

At the beginning I assumed RTOS will let me create task per functional block like GSM, sensors, stack monitor etc. that will communicate asynchronously. That model would require more than 5 tasks and twice more queues plus data structures. With real implementation and stack monitoring I realized that 2kB of memory got me 3 tasks and 2 short queues for commands and couple more more sync objects:

Looking again on my achievement one could say something like this: you do not need RTOS at all, there is virtually no “real time” aspect when one-minute resolution considered, actions could be ordered in single-threaded streamlined sequence of operations. Then rewrite existing libraries to force them using dynamically allocated memory to better balance RAM usage.

I had two goals though: (a) finish project with stable results AND (b) learn different techniques along the way. I was too stubborn to drop RTOS and I was careful choosing free-of-charge libs to not look inside too much if not forced to do so.

I had to add more memory to platform and there were two ways. I could use pin-compatible Atmega1281 that has 8kB or RAM among the differences or I could add external RAM as this chip has XMEM driver built-in. I had the latter approach in my mind from the very beginning. When drafting first schematics I kept XMEM pins unused and reserved for future use.

Both sides of equation were unbalanced due to my self-learning inclinations. I was biased towards XMEM. Fortunately it was also backed by economic calculation – while Atmega128 is widely available $2 chip then Atmega1281 is not available on local market and has to be imported from Asia at $8 a piece when buing 10 pieces. I found high-speed SRAM 32kB memory for $1 and 74VHC573 for $0.85 (per unit in 10 pieces batch).

When external RAM hard-way was rationalized to my ego, I decided to do some extra checks to find how much XMEM is slower than built-in RAM. I run read-write multi-level loops over 1024 byte array (doing some simple math on array) to get following results – internal memory time latched 50 seconds, external 54 seconds on 12MHz clock. Not much surprising as memory chip IS61LV256AL-10TLI has 10ns strobe time and runs without wait-states (configurable in XMCRA register). This told me I can use 32+4kB as flat memory without much care about slow-down even if RTOS stacks are located in external RAM. It does not matter for data logger under construction but it is a good news for more time-constrained projects and can be used as reference setup.

Next step was to play with memory sections and change default locations. Typical scenarios showb below alway keep main stack below RAMEND as it is advised by Atmel to keep MCU stable. 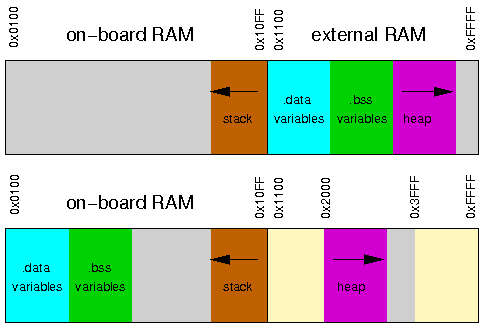 Instead of typical setup shown above I decided to go shrink main stack first and make .bss crossing RAM boundaries. Stack is moved close to registers and set to very short. When using FreeRTOS this stack is used only in two cases. On start when main() function is called and when ISR (interrupt) needs to copy current stack. Stack can be compact if main entry point is kept short, bootstraps FreeRTOS immediatelly and the all necessary initializations (requiring deeper stack) are moved to RTOS task. ISR in AVR is also not a problem as nesting is not supported. I dedicated 256bytes for main stack.

Behind main stack I placed static allocations (.data and .bss) and regular heap. FreeRTOS allocates large single array of bytes that is placed in .bss area. This reserved memory will be split by RTOS into separate stacks (per task) as well as dynamic allocations using own implementations. With such setup I can freely decide if I use RTOS (pvPortMalloc() and vPortFree() functions) or libc (malloc() and free()) dynamic memory controllers.

To structure memory this way linker has to be instructed as follow (without new-line inside):